Mondals , an eminent family of Chandernagore, stood by the history over a large epoch. The thousand memories, that the dilapidated walls hold, came out through Mrs. Neline Mondal , a passionate member of the family. She became the mouth of the speechless walls. Mrs. Mondal became our, as she puts it the “encyclopaedia of the French history at Chandernagore”.

Being a part of the distinguished family she reveals her memories and heard stories pouring them in our basket, filling our new attempt with her old recollections. She reveals how the palatial building of Mondal bari constructed in the year 1741 was originally known as chine bari or the Chinese house. Unfortunately a large part of the wing was swallowed by the ebbs and flows of the Ganges . The peculiarity of naming the house struck us, and Neline revealed that it was a part of the small Chinese settlement. The grandeur of the building and its members were proved through the three months long ‘ home fire’ celebration attended by Lord Clive and priests from several parts of India. The house is claimed to be one of the oldest zamindaris of Chandernagore.According to Neline, it is the second largest after the Count’s house in British India, leading the list within the French colonies it was one of the 20 richest families of colonised India. They possessed a small military of around hundred men , evidences of which have been preserved by the family, protecting the arms from theft. 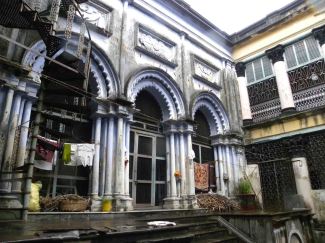 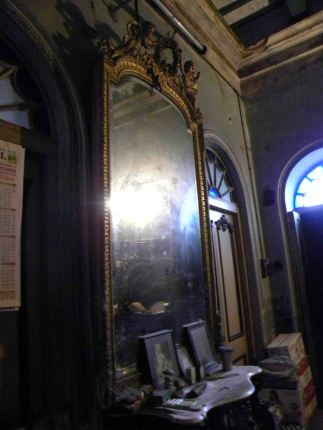 The Mondals were zamindars but held a business in a number of things, especially swords and grains. Apart from this, money came from the deal of escorting Portuguese ship against the pirates in the waters of Chandernagore. Neline also asserts having very close relations with the other zamindaris of the time doing a lot of things in collaboration with them. For instance, the Mankundu railway station was built by the collaboration between the Khans and the Mondals and were maintained at their own expenses until independence made it a property of the Government.

Getting into the house Neline revealed the culturally rich background. The house, built by a French architect is studded with statues, paintings and art pieces. She proudly spoke about the paintings in her bed room being similar to the paintings of the time of Napoleon Bonaparte. Though she did mention the lack of modern facilities in this old structure but nevertheless proudly bears the historicity on herself. She told us how Anthony Firingi was a manager at one of their salt Godowns, presently owned by her cousin in laws. Their flourishing business got them several special contacts for which they had a hotel to serve these contacts, unfortunately as Neline grieved, it was first transformed into the State Bank of India and then demolished to construct the Polytechnic Institute. She recollects how her in laws narrated seeing Rabindranath Tagore in Chandernagore in his school days. She also claimed Mr. U.N.Mondal being responsible for the construction of the pavement at the strand.

One thought on “The Mondals of Chandernagore”